Sanssouci – it is more than just the palace of the Old Fritz, and his beloved sanctuary with an expansive view over Potsdam. Sanssouci is also the world-renowned park with its distinctive, terraced grounds and majestic fountain at its center that was added to UNESCO’s World Heritage List in 1990. Here, for more than 250 years, the highest level of garden design has united with works by the most competent architects and sculptors of their times. 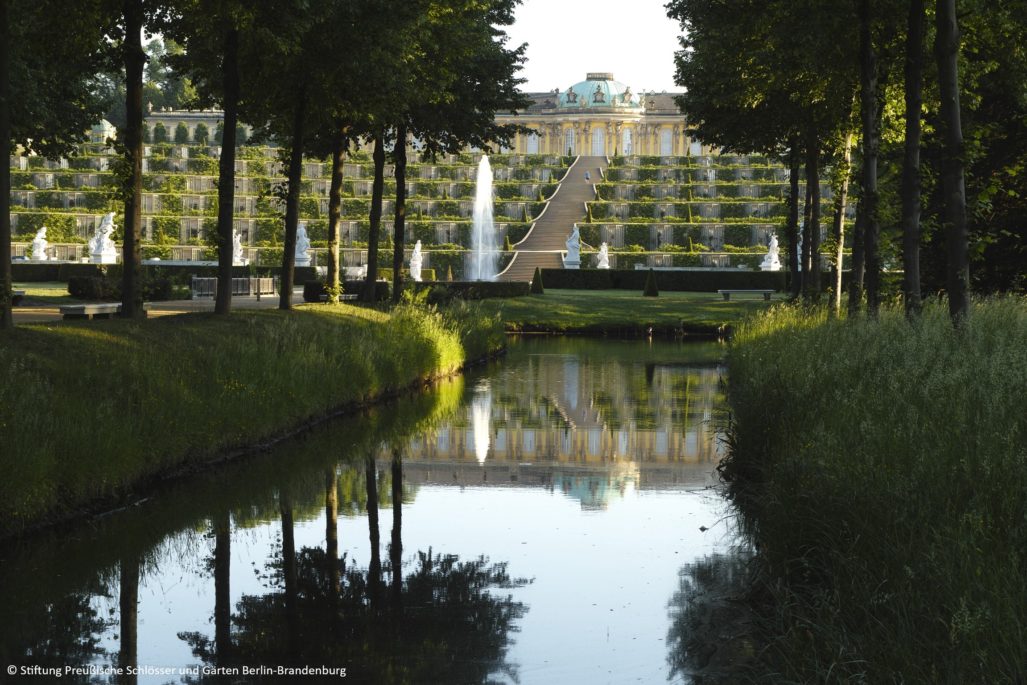 In 1743, Frederick the Great personally conceived the plans for his palace with terraces dedicated to growing wine, where he also laid out his grave site. Later, King Frederick William IV substantially expanded the garden between the private, intimate Sanssouci Palace and the monumental New Palace once again. Thus, Frederick’s French pleasure garden was intertwined with a picturesque 19th century landscaped park and enhanced with stately buildings representative of Neoclassicism and German Romanticism.

Today’s visitors can meander through the park’s changing styles of exquisite garden design. The aesthetics and philosophy of past residents of these palace grounds may be discovered in the exquisitely formed individual gardens, architecture, fountains, and in over 1000 sculptures.

The location of the palace beside its well-known vineyard terraces and the originally preserved 18th century interior decoration allow visitors to delve into the world of the “philosopher of Sanssouci.” The interiors are characterized by their elegance and stylish displays of grandeur. They are also a clear expression of the king’s love of beautiful surroundings – his “Prussian Arcadia.”

No other palace is so closely linked with the personality of Frederick the Great as Sanssouci. The name Sanssouci – without a care – should be understood as both the primary wish and leitmotif of the king, because this was the place where he most preferred to retreat in the company of his dogs. The king’s summer residence was ultimately his favorite place and sanctuary in difficult times.

The Romantic ensemble of the Roman Baths forms a picturesque counterpart to the severity of Charlottenhof Palace. It transports us to the estate of an Italian villa, where herms of Dionysus, Pompeiian column fragments, an ancient Centaur Sarcophagus and plots of southern vegetables and lush decorative plants awaken associations of an ideal Italy.

The crown prince, later King Frederick William IV, who was quite talented as a draftsman, delivered countless sketches laying out his ideas for this ensemble. Karl Friedrich Schinkel and Ludwig Persius turned the royal visions into reality, and as of 1829, a series of structures was erected: the Court Gardener’s House, the adjacent pavilion in the design of a Roman podium temple with a pillared portico, the Gardener’s Assistant’s House, the Large Arbor, the Arcade Hall and ultimately the Roman Baths.
However, the Roman Baths are neither intended as the imitation of Roman thermal springs, nor as an ancient villa. Instead, the crown prince had a new architectural creation erected that drew on an Italian country house in a 15th century style. Even the newly acquired knowledge about building construction in antiquity won through excavations in Herculaneum and Pompeii at the time was playfully and colorfully put into practice, in the informal series of the Atrium, Impluvium, Caldarium, Apodyterium, Viridarium and Billard Room.
Flat, saddleback roofs, a tower, asymmetrically connected architectural components, pergolas entwined with vine leaves, a terrace with a view across a pond to Charlottenhof Palace, and the landscaped park created by Peter Joseph Lenné, all help to shape the unmistakable character of Frederick William (IV)’s retreat. Alexander von Humboldt resided here during his stays in Potsdam.

The Picture Gallery, a structure built specifically to house an art collection, is one of the most majestic 18th century buildings in Europe. It is also the oldest surviving gallery building in Germany. Frederick the Great had it built next to the palaces Sanssouci and the New Chambers from 1755–63 (or 1764) to house his newly assembled painting collection. Here, he presented in closely hung arrangements nearly 180 of the best works of the Flemish and Dutch Baroque schools of painting, the Italian Renaissance, and the Baroque period, juxtaposed with outstanding ancient sculpture as well as French 18th century sculpture.

During his stays at Sanssouci Palace, Frederick the Great appreciated the intimate atmosphere of the Chinese House, which for him represented an escape to a far-off and cheerful world. The playful Rococo pavilion is likely the most delightful surviving example of the Chinoiserie fashion that influenced court culture throughout Europe in the 18th century.

The Orangery Palace at Sanssouci was the last and largest palace building constructed in Sanssouci Park. It is an impressive example of the buildings erected by Frederick William IV, the “Romantic on the throne.” The imposing structure with its plant halls and central palace, sculptures, fountains, arcades and terraces evokes the flair of southern architecture in Potsdam and manifests Frederick William IV’s love of Italy in tangible form.

The Botanic Garden of the University of Potsdam was created on the site of the former Royal Garden Centre of Sanssouci in 1950. Around 10,000 different plants are growing here on 8.5 hectares. Eight display greenhouses offer guests a wealth of tropical and sub-tropical plants. In the succulents house many different species of cacti are growing whilst the crop house hosts plants which are important for human and animal nutrition.

The original post windmill from 1738 had to be torn down because of its dilapidated condition. It was replaced by a windmill based on a Dutch model. Although this structure was largely destroyed in World War II, the sails of the Historic Windmill of Sanssouci, visible from quite a distance, have been turning again since 1993.

In 1768, King Frederick the Great reached the decision to have the orangery building redesigned into a guest palace. It had been built 20 years before by Georg Wenzeslaus von Knobelsdorff, directly next to Sanssouci Palace and as a pendant to the Picture Gallery. An impressive late work of the Frederician Rococo resulted that continues to fascinate visitors with its richly designed interiors.

To the southwest of Sanssouci Palace lies the small Charlottenhof Palace, built in the Neoclassical style. It forms the architectural center point of the grounds that were added to Sanssouci Park beginning in 1826.

The crown prince, later King Frederick William IV, was given the Baroque country manor by his father as a Christmas present in 1825. He commissioned the architect Karl Friedrich Schinkel and the landscape gardener Peter Joseph Lenné to redesign the estate. The result was the highpoint of their respective creative activity and a true synthesis of architecture and landscape.
The palace is steeped in the spirit of antiquity and influenced by the architecture of Roman villas in its simple formal vocabulary. Fascinated by the excavations in Pompeii and Herculaneum, Schinkel drew on wall decorations seen in the ancient houses of affluent citizens. This is also seen in the Biedermeier design of the interiors with their middle-class appearance and furnishings mostly designed by Schinkel. The rooms’ vibrant variety of materials and color is remarkable.

A lively interchange between the interior and the exterior space is conveyed through the semicircular bay on the northern side, the course of water that appears to flow from the fountains into the palace itself, the porticos, pergolas, terraces and the exedra. The famous blue-and-white striped corner room took this idea to the extreme. Replicating the interior of a tent, it served as a bedroom for the ladies-in-waiting.
Charlottenhof Palace and Park are rightly characterized as the heart of Prussian Arcadia.